What is kawaii? Kawaii is the Japanese term meaning, “cute” or “adorable”. Which can be taken a lot of different ways, as any google image search will show you. If you’re not in it, the community can seem pretty strange. But fear not, because I’m going to show you a few gifts that will melt the heart of any kawaii loving girl or guy. And by the way none of these products are sponsored. This is all my honest opinion. Trust me, I tried. Sponsors will not come near me…

Okay first rule of Kawaii girls: Do not pick out any clothes for them. A bow, perhaps some socks, okay. Nothing more. We worship a very particular Fashion God, and it must be appeased precisely.

Instead try a Decoden Kit

We’re a crafty bunch, and many of us love to decorate… like a lot… like whoa. Decoden is all about gluing hordes of adorable trinkets onto everyday items. These can get pretty out of hand quick, but that’s the beauty of it. These kits will let your kawaii girls cutesy imagination projectile vomit itself into reality. They’re fairly inexpensive too, and don’t forget the creme glue that looks like frosting. You could really say this gift takes the cake! *crickets*

Need to go even cheaper? Or just not that close? Etsy has a ton of sellers who collect and distribute kawaii stickers, memo pad paper and stationery sets. These are great if you want to support independent artists! 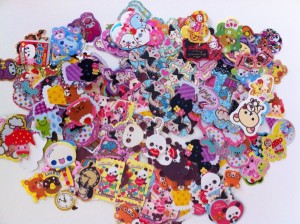 Is your kawaii girl into make up? Awesome! Don’t get her any. Here’s the thing, makeup companies like Etude House from South Korea are very popular right now, but you don’t want to be staring at a monitor desperately trying to figure out if that foundation matches her skin tone. Not to mention you could potentially be sending the message that she needs makeup and it might hurt her feelings.

She could go from Kawaii to Kowai pretty quick.

I’d like to take a moment to mention that my Youtube channel, Super Princess Tea Party, has it’s own Holiday wishlist! Some of the things are products I’d like to try  for videos or things that I need. Others are just equipment that would help the show. Items run from a mere $3.00 and up. So if you can’t become a monthly Patreon over at Patreon, perhaps consider a one time gift for the Holidays?

Check out the SPTP Holiday Wishlist

Become a Patron on Patreon

Is she the type of girl whose always plugged into her headphones? This shop does handmade cupcake headsets which are the cutest thing EVER. Check those out! And tell them I sent you. I’m fishing for a discount.

Not grand enough a gesture for your waifu?

Kawaii Box is a subscription service that will send 10 – 12 adorable gifts to him or her every month. Subscription boxes like this are awesome because every month is a surprise. You can choose to just do one month, 3 months, 6 months, or a whole year which gives you a lot of options based on your budget.

If none of these options fit, when in doubt: giant stuffed bear. Works every time.

New pixel art made in PyxelEdit!

Bitter Nerd: A portion of the Nerd community. These people struggle to self analyze and a have strong need to protect themselves from any criticism. They resent that they’re lonely and often blame women for their lack of sex lives.

I recently tweeted out the following series of messages on my Twitter.

That Molly Ringwald chick was right to choose the prep. I bet Duckie called in a phony bomb threat just to punish her for not dating him.

After years of movies telling me jocks are the bad guys, I'm now more afraid of nerds than I ever was of the jocks. How's that for irony?

This came from a place of frustration. I realized during a conversation that I genuinely feared the reactions of nerds to my content. I feared it in a way I never felt about any high school bully. The anxiety over backlash and internet tantrums had actually kept me from writing my feelings, posting content, and saying what I really felt on more than one occasion. All this from a demographic who rallies about free speech in violent games. And it pissed me off.

The subsequent reaction to it blew up my Twitter feed for a bit. The majority has so far been mostly positive or at the very least introspective. The negative reactions were… less than constructive, as they tend to be. In instances like this negative reactions tend to spiral down 1 of 2 different crap chutes. So here’s a handy guide that may help you pinpoint the particular issue you’re dealing with.

Arguments that fall under this category generally take the form of…

“I was never given the opportunity to work on my social skills, that’s why I’m like this.”

The overwhelming message here is of course the word bitter nerds hate most: Entitlement. Along with privilege, they hate these words because they cast criticism on their behavior. And criticism of any kind can’t be tolerated because…

Bitter Nerds are actually the most sensitive people on Earth.

For all these people complain about the over sensitivity of social justice advocates, I don’t seek them out and never have. Social justice advocates are not the one sending endless, whinging comments to my video about Game Grumps. They see any criticism they receive as the cruelest, most undeserved attack on their poor widdle selves. While seeing any criticism they give anyone else, no matter how toxic or abusive, to be totally justified. It’s just them exercising their free speech and- gosh darn it- they’re proud!

But back to appealing to pity.

Although these people can be frustrating, they’re problem is really just having a deep-seated sense of persecution that they’ve carried into adulthood. Combined with  feeling entitled to women’s attention, and therefore not responsible for improving themselves- this breeds resentment.

It’s impossible to get through to someone like this until they first understand that they are responsible for themselves and what they say and do. They must be open to the idea that they’re flawed and capable of improvement. But they’re also hypersensitive to anything that might resemble snark, anger, or sarcasm. Replying in any of these ways will result in them doubling down on their feelings of persecution.

Bitter nerds love to consider themselves misunderstood anti-heroes and lone wolves. I’d like to point out that this is a pretty common coping mechanism. One I fell victim to in my own youth. It gives you a  sense of identity and shields you from the sting of criticism.

“I’m not a loser, I’m just misunderstood. They don’t get how special I am. And that’s fine as long as I am super duper special.”

The problem comes up when you’re confronted with the reality that so many other people suffered in the same way. People we thought “had it all” struggled just as much as we did, if not worse.

Case in point, my boyfriend. 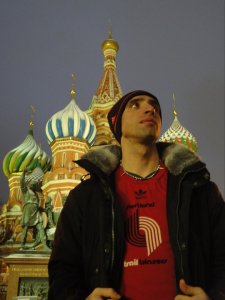 Stupid hot guy… I bet he traveled the world with the money he made being popular in High School.

If I had met him in high school I would have never spoken to him. I would have never even considered talking to him. He was cute and on the soccer team and had legs like Chun Li. Guys like that didn’t go out with chubby nerd girls who drew Sailor Moon fan art in their notebooks. He might as well have been a different species.

But the reality was he was taking so many AP classes at such a young age that he could barely connect with anyone in his school.

“The older kids didn’t like the younger kid showing off, and the kids my age didn’t relate to me because I wasn’t in any of their classes. I felt like I was completely alone. I had some friends, but I didn’t feel like I was part of a group like everyone else was.”

Learning this was kind of mind-blowing for me. I was so absorbed with how everyone dismissed me and how bad that made me feel that I was totally oblivious to the fact that high school sucks for everyone. If you’re fat and ugly, like me, you were an invisible loser. But if you were beautiful then fat, ugly girls like me would resent you forever. You can’t win. And the first step in escaping this persecution complex is realizing that we were not the only ones suffering. And no, our suffering wasn’t worse or somehow more important than others. We are not the specials.

Appealing to pity only proves that you’re still operating the same way you were in adolescence. It’s a self-centered and extremely flawed perception that has no place in modern conversations about politics, social justice or gaming. I implore you, as a fellow nerd, we all seriously need to grow out of this. I know it’s hard to stop. After sitting in a specific chair for long enough that butt nook is pretty damn comfortable. It soothes us to think that we’re the real victims because it takes all the responsibility off of us to change our behavior. But that’s a coward’s approach to the world. It’s time to take up the sword, put on our big kid pants and start acting like the heroes we look up to in our games.

Sometimes I get bored. Very bored. Sometimes I get so bored that I start sending my friends handwritten letters. One particular series of letters gradually descended into a crazed rant about a Lovecraftian monster that lived in my shower drain. The being eventually took over my body and started writing the letters entirely in Latin. The final letter was just a pile of torn and burned pieces of paper shoved into an envelope.

…I was very bored.

Last night I was in the kitchen straightening up and heard a noise. It was a scratching noise that sounded faintly like an animal. Convinced there was a mouse behind the fridge, and that the dark spots underneath were droppings, I started to investigate. Unfortunately the spots turned out to be coffee beans I had spilled a week earlier.

But then today… in the bathroom…

I was so wrapped up in finishing this game while experiencing the first precious moments of Fall as Summer breathes it’s last sputtering, agonizing breathe that I forgot to actually mention I finished it.

Halloween Hunt is a small text adventure I wrote and programmed in Twine. You play you, as in you, and you’re investigating a spooky mansion. I’ve always had a soft spot for haunted houses so I hope you enjoy it and send in your results.

Jellyfish Station
Create a free website or blog at WordPress.com.